Call on ANC to support reversing the VAT hike in 2019 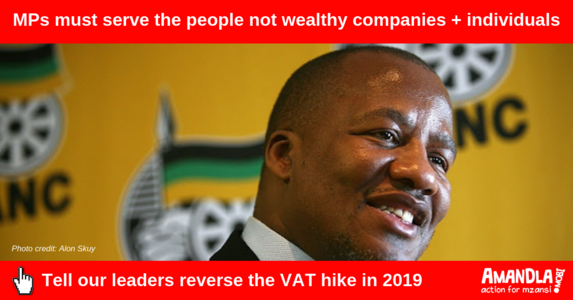 We call on all 6 major political parties to stop taxing the poor into the ground and reverse the VAT hike in 2019. Instead the wealthy individuals and companies should be taxed by increasing; Corporate Income Tax, Personal Income Tax, Property and Land Tax, the tax on alcohol and tobacco and increase the Sugary Drinks Tax (Health Promotion Levy) to 20%. The Carbon Tax should be implemented 1st April 2019, and a permanent Net Wealth Tax should be introduced as well as a major crack-down on illicit financial flows and tax evasion.

Earlier in the year amandla.mobi ran a campaign against the VAT hike and submitted a petition with 55,000 signatures to all 400 members of parliament (MP). Not one MP responded. Even the biggest political parties have said they are against the VAT hike [1], and many have said the VAT hike would hit the poor the hardest, yet it was passed on their watch. But in the next few weeks, starting from Wednesday 7 November, Parliament will be discussing our budget and taxes. It doesn’t matter which political party you voted for, or if you voted, MPs are our elected representatives and work for us.

We have an opportunity now to remind them they work for us and can’t ignore the voice of the people. If enough of us come together and flood the inboxes of the key leaders of the 6 largest political parties, almost every MP will hear our voices and the conversation could be shifted towards reversing the VAT hike in 2019, and forcing wealthy companies and individuals to pay their fair share.

We welcome Treasury including sanitary pads, white bread and flour in the list of tax-free items but the poor are still in economic crisis and the VAT hike lays the burden of fixing the economy on the shoulders of the poor. The gap between the rich and poor in Mzansi is one of the largest in the world. It is unjust that Treasury keeps proposing solutions to the economy by increasing the tax burden on the majority, especially poor Black women when 89% of companies in SA are not tax compliant in 2018 [2] and R965 billion leaves the continent in illicit financial flows every year. [3] Mzansi is dominated by greedy companies. We the people essentially subsidize corporates. Government and Treasury should tax the mega-rich instead.

amandla.mobi is an independent, non-partisan community organisation that fights for economic and social justice. We are targeting all 6 major political parties’ key leaders. You can call on the other 5 to support reversing the VAT hike in 2019 and call for treasury to tax the mega-rich instead here:

We are also flooding the inboxes of the remaining 377 members of parliament with a clear message, support reversing the VAT hike in 2019 and call for treasury to tax the mega-rich instead. If you have time, contact us at hola@amandla.mobi and we will get back to you with more information on how you can take action. Between the tens of thousands who are part of this campaign, if each of us send messages they will have no choice but to respond to our demands.