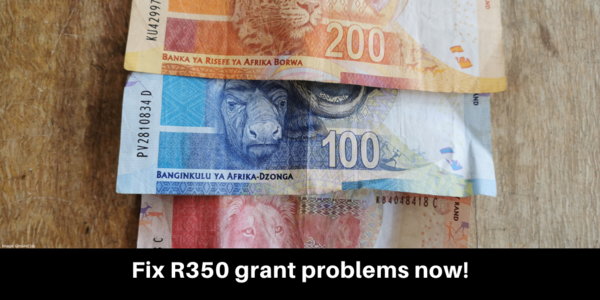 Stop making people's lives even harder! Force Finance Minister Godongwana to stop underfunding the R350 so that we can scrap the new R350 grant regulations. The new R350 grant regulations are anti-poor and are a step backwards from implementing the Basic Income Grant which has mass public support and research. This also breaks President Cyril Ramaphosa's commitment he made in his February 2022 State Of the Nation Address (SONA) speech that “no one must be left behind” [1].

Currently, the allocated budget for the R350 grant caters for 10.5 million people per month, while over 18 million people live beyond the food poverty line, and 13 million are without income [2]. How are those excluded expected to support themselves? How else can they put food on the table when they have no other means to feed themselves and their families?

We call on the President, Finance Minister, Social Development Minister and Sassa to:

- Scrap the new exclusionary regulations which affect: caregivers, those with an inflow of money into their accounts of more than R350, which is not an income, those who receive child maintenance money but are unemployed, those declined due to living in government facilities, and those rejected due to unfounded reasons by Sassa and UIF database;

- Allocate enough budget to allow all those who need the grant get to get it;

- Relook at the means test used to determine eligibility. People should not have to prove how poor they are to qualify for social assistance. This includes the new requirement to check people’s bank accounts for eligibility;

- Work on continued discussions and engagements with UIF to improve the database and put a stop to unfair exclusions for people who have never been employed nor have claimed their UIF payouts or are told they have a UIF status by Sassa. Further, commit to providing consistent updates on progress;

- Fix the congestion on Sassa’s communication channels, work on improved communication style and tone with beneficiaries, and implement other channels that would allow people to apply for the grant without having to go online.

- Fix the NSFAS beneficiaries issue - many former NSFAS recipients are excluded on the basis that they were once registered with NSFAS despite being unemployed graduates and/or actively seeking employment;

- Fix the ‘pending’ and ‘cancelled’ issues with grant applications - applicants should not have to wait an unreasonable amount of time before their outcome is determined;

- Reinstate the R350 grant payouts to the post offices and Sassa branches. The problems plaguing Sassa and the post office shouldn’t affect those who rely on their services. Some grant recipients cannot travel long distances and stand in long queues due to health problems. This should be prioritised and fixed;

- Applicants should be able to have their issues dealt with quickly at any Sassa branch closest to them; beneficiaries must not be told to refer back to the Sassa where they come from.

Sign this petition and help us get President Ramaphosa, Treasury, DSD and Sassa to reconsider the exclusionary regulations of this grant.

The R350 SRD grant was mainly introduced to provide relief to the unemployed during the first lockdown in 2020 when the Covid-19 pandemic hit. The need for the grant further highlighted the urgent need for the long-overdue BIG which was recommended by the Taylor Committee Report nearly 20 years ago [3]. Unless the problems of the grant are urgently attended to and fixed, they will continue to hinder the progress of implementing the BIG by April 2023. President Cyril Ramaphosa must honour his commitment to leave no one behind and ensure that Treasury, DSD and Sassa work together to fix all R350 issues before it ends in March 2023 and then have it turned into the much-needed Basic Income Grant.