Tell Pres. Ramaphosa to give pensioners R2500 and a 13th cheque in December 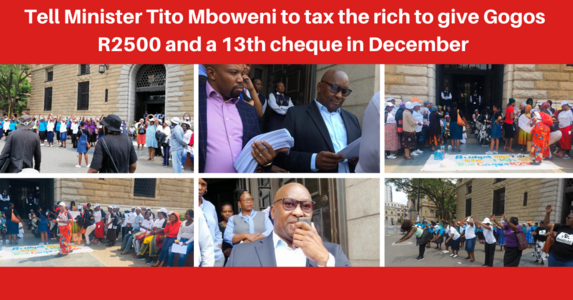 *Update: Gogos from PMB joined by other pensioners organizations from all over Gauteng held a sit-in at the National Treasury offices in Tshwane. They delivered their demands and more than 51 000 of your signatures to Treasury. They are now waiting for Minister Mboweni to respond ahead of his 2020 Budget Speech.*

We the undersigned call on you to increase the old-age grant for all Mzansi pensioners to R2500 as a start towards equalizing it to the National Minimum Wage. We also call on you to give all pensioners an annual December 13th Cheque.

We join the call with civil society organisations who are advocating that budgets are a political tool and that prioritisation of revenue is required to deal with our most urgent political problems. Government should tax the rich fairly so they can give adequate grants to Mzansi pensioners.

The majority of pensioners in South Africa when they worked did not earn enough to support their families and save for their retirement. When they reached retirement age, their only option was to go onto the state old-age pension. The massive levels of unemployment together with the VAT hike, and massive hikes in food, transport and electricity has put enormous pressure on their pensions.

Pensions, like wages, bring income into the home. The old-age grant is R1 700(in 2018) a month which supports entire families making it a poverty-level grant. December and January are very long months for the 3.5 millions pensioners on this grant. They have to stretch R1 700 (in 2018) to pay for school uniforms, school fees, stationery and lunches for their grandchildren starting school in January.

Even though pensioners try and put money aside by sacrificing their own needs during the year because of the increased financial pressure and deepening unemployment crisis; pensioners will have to go into deeper levels of debt to support their families. Pensioners are very worried that the extent of the debt will push them into ever deeper levels of poverty.

Pensioners feel that a 13th cheque in December will help them absorb some of the pressures of these extra expenses over the December and January period and allow families to be in a better position come January and the New School year. Already Pensioners travelled to Parliament and spoke to MPs about their demands [1] [2].