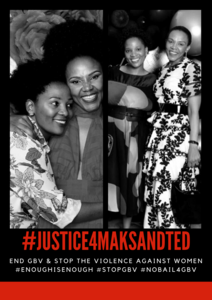 We appeal to the Minister of Justice and correctional services and the government at large; to take a stand and act against GBV. We want Justice for the deaths of Makoena Mabusela and Tebogo Mphuti who were brutally murdered on the 10th of October 2020 in Polokwane, Limpopo. The husband of one of the deceased has been found to be one of the suspects along with (4) other suspects. GBV cases like this usually take time to be solved with perpetrators receiving bail or being set free with no accountability or arrests. We demand;
- Denial of bail for ALL perpetrators
-Publication of a perpetrators registers to deter them from further action and to provide potential victims with information to mitigate the risk of GBV.
-Enhancement of victim support programmes aimed at:
*Empowering women to stand against perpetrators
*Including anti-violence education for girls and boys in the skills development ecosystem;
*The inclusion of enhanced gender studies and awareness in the curriculum

Gender-based violence has become rampant in South Africa. Women and children are brutally murdered daily. We cannot continue to go on like everything is normal. IT IS TIME TO TAKE A STAND AGAINST GBV. The government and private sector have to come together and remove the systemic barriers to gender equality and advocate for behavioural change in order to turn the tide that has made violence against women and children a societal norm. The two women who were brutally murdered had families and children. They were part of a community who were highly dependant on them. We need to build a justice system that women and children will feel confident in. We need a legal framework that will stand firmly against GBV and be in full support of women and children. The deaths of all these extraordinary women will not be in vain.