To: The City of Cape Town Property Manager: Magda Murray

Cheap rent for the rich? Object to the Rondebosch Golf Course lease

The City of Cape Town renewed the lease despite having received 1682 objections. Read more here: https://www.groundup.org.za/article/no-housing-rondebosch-golf-club-now/

To keep up to date on this important work visit http://reclaimthecity.org.za/ 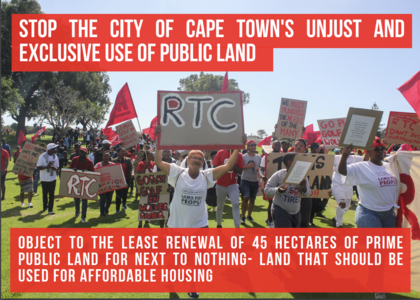 You have the power to stop the City of Cape Town’s unsustainable and exclusive use of public land. But we have to act now, we only have until Monday 9 March 2020 to make our voices heard. Make a submission to object to the lease renewal of 45,99 hectares of prime public land that should be used for affordable housing.

In the face of the worst housing affordability crisis in the country, the City of Cape Town continues to subsidise the rich by renting out prime state land at massively discounted amounts for private use – land that could better be used to reverse the City’s apartheid legacy.

On 29 January 2020, the City of Cape Town asked the public to submit comments or objections to their plans to renew the lease of 45,99 hectares of City-owned land (the equivalent of 45 rugby fields or a small suburb) to the Rondebosch Golf Club for a period of ten years at a nominal rental of R1 058 per year – or just R88,17 per month [1]. This prime land is close to the best hospitals, top-performing schools in the province, a police station and two train stations – making it perfect for the development of affordable housing. Yet the City plans to lease this land to a golf club for the exclusive use of its wealthy members, members that can afford to pay membership fees of R17 000 per year [2].

Cape Town is the most spatially divided city in the country - it is still separated along race and class lines. The City has consistently blamed this spatial injustice on the lack of well-located land that could be used for affordable housing. But the City often misses the most obvious solution: It already owns massive pieces of land in well-located areas. Land that is unused or not being used to its full potential, that could provide ample space for affordable housing and reverse the City’s apartheid legacy.

Last year, Ndifuna Ukwazi released a research report exposing how the City is disposing of the public land it owns by leasing it to private organisations at massively discounted rentals [3]. This land includes parking lots that are empty for up to 18 hours a day, bowling greens with very few members, and massive golf courses that provide enjoyment to only a few wealthy residents on the weekends. This is an inefficient, exclusive and unsustainable way to deal with well-located public land. Surely this land should be put to better use?

If we are serious about addressing Cape Town’s apartheid legacy, we need to make our voices heard. Object to the lease renewal of 45,99 hectares of prime public land that should be used for affordable housing before 9 March 2020.

The experts at Ndifuna Ukwazi have put together this progressive submission you can use when sending in your own objection. If enough of us send in our objections we can stop the City of Cape Town from renewing the Rondebosch Golf Club lease.