To: Dr Dhlomo, Chair of the Health Portfolio Committee,

Demand a NHI that works for the people 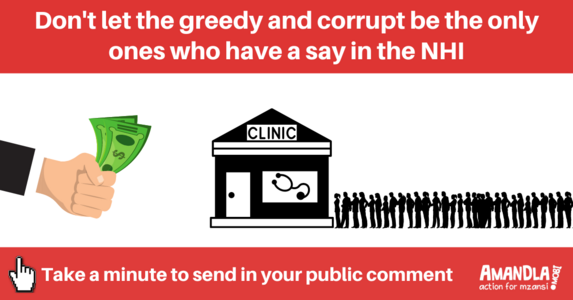 *Note that we have now included 160,000 names in support of an NHI that works for the people, that joined via our USSD codes, of which 3000 are detailed submissions*

You have the power to shape the NHI to deliver quality healthcare for all. But we have to act now, we only have until Friday 29th November to make our voices heard.

Minister Zweli Mkhize has presented the National Health Insurance (NHI) bill to parliament [1]. It’s a bit complicated but basically the NHI is a reform that aims to improve how healthcare resources are allocated, rather than having one system for the rich and another for the poor, like we currently do.

For example; at the moment if a domestic worker from Alexandra gets sick they will have to wait in a long line at the local public clinic, while those living in Sandton with medical aid can get on-the-spot health care. But under the NHI, there could be more funding for health, so the public clinic in Alex could have shorter waiting times because of more doctors. If the public clinic in Alex doesn’t have a specialist, the clinic could refer the domestic worker to the nearest specialist. Even if this specialist is at a private hospital in Sandton, the NHI fund will pay for this. You can learn more about the NHI here: https://www.amandla.mobi/nhi_faq

But how would the NHI achieve better health care for the majority?

1) Through more accountability from the public and private sector

Long waiting times, stock-outs of critical medication, shortages of equipment and staff are issues at most public clinics and hospitals. And going to a private doctor or hospital is too expensive and does not guarantee quality care. According to a Competition Commission report, even though you pay more for private healthcare, the service is less than satisfactory and is run by greedy profit maximising monopolies [2]. But the NHI could introduce new rules for all clinics and hospitals. Whether they are private or public, all would have to meet the same standard of health care. These rules could force the private health system to put people before profit. This is part of the reason medical aids don’t want the NHI because it forces them to be more accountable and makes it harder for them to overcharge us.

2) Through more resources for health

- Right now the rich have access to the majority of health resources, such as doctors, specialists, ambulances etc, through medical aids. But under the NHI health resources would be shared more equally.

- Under the NHI, everyone, rich and poor, could be registered together under the NHI fund, and have equal access to health resources. This may be another reason some of the rich don’t want the NHI as it could mean they have to access the same services as poor people.

- The NHI would be funded by the existing health budget, but also by making the rich pay more in tax, something many rich people and companies have avoided doing. That could be another reason the rich are fighting to stop the NHI.

Right now right-wing groups like Afriforum and some people with medical aids, are mobilising in large numbers to try to stop the NHI. We can’t afford to let the rich try to stop the NHI which could improve the lives of the majority.

We also can’t afford an NHI that fails our people. The NHI is not perfect, as seen in the pilot sites. This is why it is more important than ever to make our voices heard and with enough public submissions, shape the NHI to serve the health needs of the majority of people in South Africa.

If enough of us come together, our public submissions could help ensure that the NHI is not captured by medical aids or greedy capital. While also demanding the NHI is accountable and provides quality health services free from corruption, patronage and mismanagement.

The amandla.mobi team are not health experts. But what we have done is read expert submissions and identified key recommendations that reflect the values of the amandla.mobi community. That’s why we have created this progressive submission you can use when sending in your own submission.

An extra 3000 people have joined the campaign via USSD. We have also now added these submissions to our count.

An extra 10,000 people joined the campaign for an NHI that works for the people. This brings the USSD total to 170,000. We have updated our counter to include this, in addition to submissions made here.

Please note that this campaign page is only one of two ways people can send in public submissions. We also have a free USSD code where people can add their name in support of an NHI that works for the people and request to add to their submission by sending a please call me to us so that one of our NHI service centre team members can call back and write down one's submission. So far over 160,000 people have added their name in support of an NHI for the people, through our USSD codes. The english USSD code is; *134*1994*644# We have now updated the counter to include this additional 160,000.

Please note that the tally of the public submissions incorrectly uses the word 'signatures', instead of submissions. We have had difficulty changing this on our system and wish to reiterate that each message sent is a submission.