Parliament wants feedback on the mini-budget, tell them to increase the sugary drinks tax to 20% 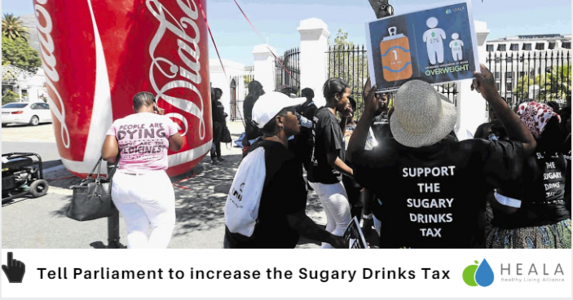 We want parliament to support an increase in the sugary drinks tax to 20%, instead of increasing other taxes that hurt the poor.

Our country is facing a health crises with 10,000 new cases of diabetes reported each month [1], type 2 diabetes has been linked to sugary drinks, and so has heart disease, liver and kidney damage, But thankfully we stopped Coca-cola’s greed and Parliament passed a Sugary Drinks Tax late last year.

Now, the new Finance Minister Tito Mboweni is walking a tightrope, and right now there is a good chance industry could be fighting anything that threatens their profits. In his first budget speech,
Minister Mboweni missed an opportunity to mention anything on the sugary drinks tax. But right now Parliament has opened public comment on the Mboweni’s ‘mini- budget’ (also known as the Mid-Term Budget Policy Statement). If enough of us come together and make submissions calling for the Sugary Drinks Tax to be increased from 11% to 20%, we could counter industries greed and have a stronger Sugary Drinks Tax.

We already know that the WHO and Wits researchers recommend a minimum tax of 20% on sugary drinks to start reducing diseases like type 2 diabetes.

We know the private sector doesn’t want a Corporate Income Tax increase, We know the Finance Minister is under pressure to increase tax especially, and may even consider increasing VAT again [2]. But if we make enough noise, we can show Treasury and Parliament, that increasing taxes on sugary drinks, tobacco and alcohol, are better for our nation's health and budget than another VAT hike.