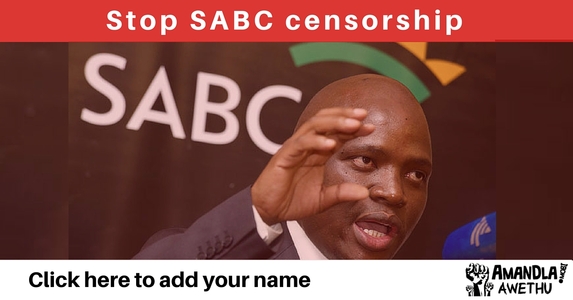 1) The SABC’s illegally revised editorial policies be scrapped, and all journalists suspended under Motsoeneng’s edict be reinstated with immediate effect.

2) We demand the immediate reversal of all downward editorial decisions premised on the unlawfully revised editorial policy.

3) We demand an SABC that is free of editorial, commercial, and political interference; and we demand it NOW!

The COO of the South African Broadcasting Corporation (SABC), Hlaudi Motsoeneng, has among other things taken a decision to ban visuals and reporting on local protests that may include the destruction of public property. His reasons for this, he says, is that these actions are “destructive and regressive”. Even though Mr Motsoeneng makes valid points about violent protest, his decision to ban visuals of these kinds of protests is regressive, and takes us back to the practice of the SABC during its apartheid years.The SABC has a mandate to:
"report, contextualise and present news and current affairs honestly by striving to disclose all essential news and by not suppressing relevant facts or distorting it by wrong or improper emphasis”.
Mr Motsoeneng and the SABC’s decision amounts to self-censorship by our public broadcaster, and suppresses important information about the conditions and conflicts happening in our communities.
The SABC is the Public Broadcaster regulated inter alia by the Broadcasting Act and is monitored by ICASA, the regulating body.
Editorial Independence – The SABC is governed by the Charter of the Corporation, which enshrines the journalistic, creative and programming independence of the staff of the corporation, and the constitutionally protected freedom of expression.

(8) The Corporation must develop a Code of Practice that ensures that the services and the personnel comply with-
(a) the constitutional principle of equality;
(b) the equitable treatment of all segments of the South African population;
(c) the constitutional requirement of equitable treatment of all official languages;
(d) the rights of all South Africans to receive and impart information and ideas;
(e) the mandate to provide for a wide range of audience interests, beliefs and perspectives; and
(f) a high standard of accuracy, fairness and impartiality in news and programmes that deal with matters of public interest.

WE INSIST THAT THE SABC COMPLIES WITH ITS OWN CHARTER, THE CONSTITUTION AND THE BROADCASTING ACT.

THE PUBLIC HAS THE RIGHT TO KNOW. THE BOARD AND EXECUTIVE OF THE SABC MUST BE REPLACED BY INDEPENDENT, NON-POLITICAL, QUALIFIED AND RESPECTED PEOPLE WITH INTEGRITY WHO WILL NOT ALLOW INTERFERENCE IN NEWS AND CURRENT AFFAIRS.

THE SABC MUST LIVE AND PRACTICE ITS VISION, MISSION AND VALUES.

THE BULLYING, INTIMIDATION AND PURGING OF JOURNALISTS AND STAFF WITH OPPOSING VIEWS MUST END AND MANAGEMENT BY FEAR AND LITIGATION MUST STOP. (EMPLOYEES AND IN PARTICULAR JOURNALISTS ARE CONCERNED THAT THEY ARE BEING SPIED ON.)
THE PROMISE OF REWARD OF R100 000 FOR ANYONE PROVIDING INFORMATION IN RESPECT OF STAFF "LEAKING INFORMATION" MUST BE WITHDRAWN WITH IMMEDIATE EFFECT AS IT HAS TURNED THE WORKPLACE INTO A "SPY VS SPY" SITUATION WHICH IS NOT CONDUCIVE FOR A HEALTHY WORKPLACE. IF MANAGEMENT HAS NOTHING TO HIDE, THERE IS NOTHING TO "LEAK".

We, the undersigned, call on the Complaints Compliance Committee to stop the self-censorship and compel the SABC to comply with its own mandate and the Constitution of South Africa by reporting on the news as they happen, including showing us visuals of violent protests that involve the destruction of property on its news and current affairs programming.

The SABC is our public broadcaster and has to serve our interests. This kind of self-censorship is anti-democratic and not what our people struggled for in the national democratic revolution.By self-censoring reporting on these protests, the SABC is denying us our right to know which municipalities are failing to deliver services to their people, and the extent to which our people are unhappy with our local government authorities. This information is especially vital as we draw closer to local government elections where we will be choosing councillors and mayors. Journalists and Staff members at SABC are being suspended unceremoniously because they question the legitimacy of the self-censorship. Those with consciences are being forced to resign. Recently, under Hlaudi Motsoeneng, the SABC opted out of a public consultation process in which the public could comment on the Broadcaster's draft policies.This resulted in Mr Motsoeneng giving himself the role of Editor-in-Chief and by that giving himself power to rule on any controversial editorial line and/or one which might have significant financial and/or legal implications, issues that should ideally be taken over by the Editor-in-Chief and not the COO. We are also aware that all of this is happening at the backdrop of a cloud around Mr Motsoeneng's qualifications and other irregularities at the SABC that the Public Protector has been looking into.