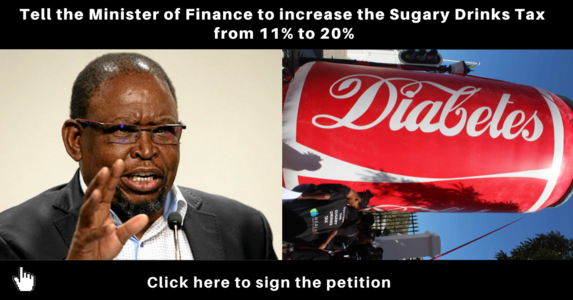 *Update* The Finance Minister announced an increase on the sugary drinks tax (HPL) in his 2022 budget speech. The increase was small but a step in the right direction, but on 1 April 2022 Treasury reversed this decision. Treasury has stated however that they will do public consultations to look at expanding the sugary drinks tax to include fruit juices etc.

Everyday people, experts and organisations that have been calling on Treasury to increase the sugary drinks tax to 20% for the past 5 years. Treasury showed foresight with its 2016 proposal of a 20% tax and a tax cut-off level of 1 or 2 grams per 100ml, but the tax was watered down due to industry greed and is now only 11%. Since 2017, in the lead up to nearly every budget speech and mid-term budget policy statement, members of the public have been calling for you to increase the Sugary Drinks Tax (Health Promotion Levy) to 20% and/or include 100% fruit juices under the Sugary Drinks Tax. That’s 17,692 signatures and 395 public comments.

Now more than ever, we need Treasury to put the health of people in Mzansi first. We would like to remind you of the commitment by Treasury Deputy Director General Ismail Momoniat that Treasury will “... increase the tax until we get the result we need” [1]. We hope your interests lie with the health of the people and not with the food and beverages industry’s profits.

Greedy companies want to stop the sugary drinks tax to protect their profits. Many of these same companies have a history of dishonesty which it comes to the economic impact of a tax on sugary drinks. The sugar industry has exaggerated their statistics when it comes to the claims they make about the Sugary Drinks Tax causing job losses when research from Trade and Industry Policy Strategies finds otherwise [1]. It’s clear that increasing the Sugary Drinks Tax to 20% could help improve our people's health. We have an opportunity to help achieve this goal. If enough of us come together, we can remind the Minister that he has the public support necessary to increase the Sugary Drinks Tax.

Thank you everyone for the incredible response to this campaign, especially those who signed by sending us a please call me.