Tell Parliament to support the tax on sugary drinks 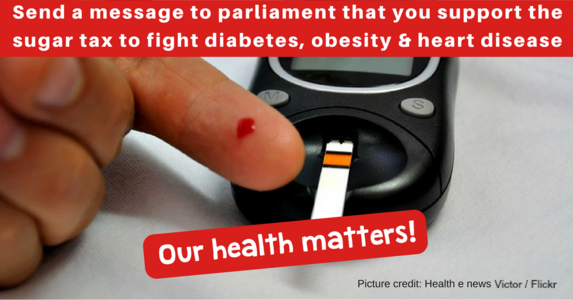 Tell Parliament to support the tax on sugary drinks for the health of all South Africans!

Sugary drinks are one of the most significant contributors to health problems such as diabetes, obesity, heart diseases, certain cancers and dental decay in the world and in South Africa.

Last year, the Minister of Finance announced a plan to tax sugary drinks such as soft drinks, energy drinks, fruit drinks and sweetened milks by April 2017. (Pure fruit juice and milk will be excluded from the tax.)

The Parliamentary committees discussing this issue are under pressure to drop this proposal, lower the tax rate, and exempt more products. Beverage companies and retail groups are flooding Parliament with comments to prevent this policy, urging exemptions and weaker regulation.

That’s why Parliament needs to hear from YOU to make sure the final policy is strong and effective in lowering the consumption of harmful sugars in beverages.

South Africa is already ranked the most obese country in sub-Saharan Africa. Excess sugar consumption is a major cause of obesity and its related diseases, as excessive sugar intake causes increased risk of diabetes, liver and kidney damage, heart disease, some cancers and dental caries. The World Health Organisation (WHO) and the World Cancer Research Fund recommend that people should consume no more than 10% of total calories from sugar.

Sugary drink consumption is also linked to under-nutrition. In many African countries, including South Africa, babies are given sugary drinks as a weaning food or even as a substitute for infant formula, which increases under-nutrition and stunting. Stunted infants have a much greater risk of becoming obese and diabetic.

With your help we have already delivered more than 150 public comments to Parliament during the open comment period. We are now continuing to collect signatures in a strong show of support from South Africans for the Sugary Drinks Tax. We will deliver them to Parliament in advance of the final hearings in March.