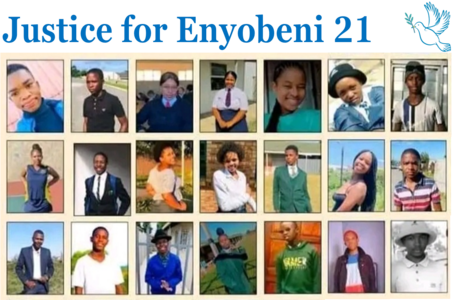 In the early hours of 26 June 2022, 21 young people died in a tavern in Scenery Park in East London [1]. They shouldn’t have been in the tavern as they were below the legal age at which they can buy alcohol and at which alcohol can be sold to them. Why were they there? What led them to want to celebrate the beginning of school holidays (‘pens-down’) in a tavern? Why were they allowed in? What happened in the tavern? How did they die? These are all questions that need answers.

So far, very little has happened to help the families of the deceased to understand what happened and to get some kind of closure. They don’t have official, written confirmation of how their children died [2]. And those adults who were immediately responsible for their deaths are not being held fully accountable. Yes, they have been charged with contravening the Eastern Cape Liquor Act [3], but that is not enough. What they did – or didn’t do – caused the death of 21 young people. They must answer for that, too.

But it’s not just the owners of the tavern and the adults working for them that must be held accountable. We also want to know how it was that the children were there. We want the authorities to be challenged to explain how a situation has developed in the country where such a tragedy could have occurred. There are multiple role-players that must answer for this unnecessary and avoidable loss of young lives – the SAPS, the Buffalo City Municipality, the Eastern Cape Liquor Board, the Eastern Cape Department of Economic Development, the Eastern Cape Provincial Executive Council and other provincial entities, the National Department of Trade, Industry and Competition which is responsible for the national Liquor Act and the long-awaited Liquor Amendment Bill, the National Department of Social Development which is responsible for the national Drug Master Plan and the Central Drug Authority, National Cabinet for not taking collective responsibility for ensuring that we live in an alcohol-safer country.

There must be a full independent inquiry that results in a clear accounting of what happened, why it happened, and who is responsible. The outcome of such an inquiry must also chart a way forward that will ensure that such a tragedy never happens again. The name Enyobeni must always be remembered, just as we remember, amongst others, Sharpeville, Boipatong, Marikana and Life Esidimeni. That the 21 young people died in Enyobeni Tavern is terrible enough. That those responsible are not held accountable, and that concrete steps are not taken to ensure such a thing never happens again, would be unforgivable.
We demand a full, independent inquiry to take place as urgently as possible. You have the power to institute such an inquiry, Mr President.

To civil society organisations and individuals across the country,

The Enyobeni Tavern tragedy doesn’t just affect the families, friends and communities of the 21 young people who died in the early hours of 26 June 2022. It affects all of us because it could have happened anywhere in the country – in alcohol outlets in cities, towns and villages across all provinces, in rich or poor areas, in suburbs, townships or informal settlements.

It’s easy to point a finger at the adults responsible for running the tavern. Some people even blame the parents, the children themselves. But where does the real responsibility lie? We elect local, provincial and national governments to serve us, to ensure our health, safety and wellbeing, to protect us from harm. We expect government to put in place laws that set guidelines for what can and can’t be done and to ensure that those laws are enforced. We expect government to identify challenges in society and to address them. We expect government to be responsive, to listen to us, the people who voted them into service.
Please sign this petition and share it with others.

We need to speak with a loud voice to call on the President to ensure there is a proper inquiry into the Enyobeni Tavern tragedy and that effective steps are taken to make sure it never happens again. The lives of the Enyobeni 21 can never be brought back, but we can make sure that their deaths are not in vain, that they can lead to the creation of an alcohol-safer South Africa going forward. Sign the petition now and share with everyone you know!

Together with a representative(s) of the families and other stakeholders, SAAPA SA plans to deliver the petition to the offices of the President in Cape Town or Tshwane, depending on the timing of the delivery.