Call on SA Government to Back Mass Farmer Strike in India! 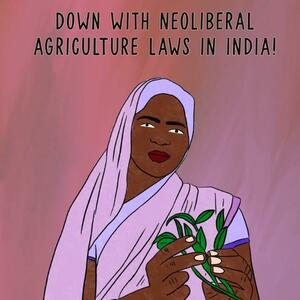 On the 26th of November 2020, approximately 250 million Indian workers and farmers embarked on continuing strike action against three new agriculture laws passed by Prime Minister Narendra Modi’s fascist Bharatiya Janata Party (BJP) government in September of last year. This protest is one of the largest in history and deserves our attention. We hold that the three agriculture laws are anti-Labour and pro-Capital, deregulating the agriculture industry and exposing it to the tyranny of the free market, with corporations poised to exploit the new laws at the expense of workers and small farmers. We are appealing to you, as an elected representative entrusted with the foreign policy of South Africa, to recognise the gravity of this situation. We call on the South African government to support the mass strike action in India and back the following demands made by the striking farmers:
1) The complete repeal of the three anti-farmer agriculture laws
2) The establishment of a guaranteed Minimum Support Price on produce

Since the 26th of November 2020, tens of thousands of farmers have camped near the border of New Delhi, the Indian capital. On that day, an alliance of national trade union federations called a nationwide strike which converged with a march on Delhi by the All India Kisan Sangharsh Co-ordination Committee (AIKSCC), a united front of over 250 farmer organisations. Large parts of the country came to a halt as direct action was undertaken. Protesting farmers were met with unacceptable police brutality - blockades, teargas, baton charges and water cannons - in a bid to prevent them from reaching the centre of Delhi. In South Africa we are all too familiar with the use of brutal police tactics to suppress popular protest and we condemn the use of these tactics against our comrades in India. The striking farmers have declared that they will not return home and the strike will not cease until the agriculture laws are repealed entirely. They will not be moved and we salute their resolve.

India’s agriculture industry employs more than half of its population of nearly 1.4 billion people. The country is in the middle of an unprecedented economic decline, experiencing the worst recession in nearly 30 years. Socio-economic inequality is staggering. As South Africans we are also aware of how closely-linked unemployment and socio-economic inequality is to hunger. India’s new agriculture laws were passed despite a lack of consultation with agriculture experts and the leaders of farmer organisations. These laws threaten the acquisition of produce by state-run organisations at a fixed Minimum Support Price. What this means is that small producers have little bargaining power in the free market system and fear that large corporations will take advantage of this, forcing farmers to sell their produce at a lower price than the price which had previously been guaranteed to them by the government. The laws come at a time where there is increasing conflict and disagreement between farmers and the state, on account of the government turning a blind eye to farmers’ demands for better crop prices, additional loan waivers and irrigation systems to guarantee water in times of drought. They are also framed by the horrific numbers of Indian farmers who have been driven to suicide by debt.

All of this is happening within the context of carbon capitalism which is putting the future of humanity in jeopardy and exposing the most vulnerable among us to the effects of the climate crisis. In South Africa, in India and across the world, corporations are not the solution – they are part of the problem. The methods of small scale farmers across the world will not only feed the people, but will also build resilience in the face of the climate crisis. The protection of the knowledge and practices of indigenous communities at the forefront of this movement is also paramount.

In the face of oppression and systems of exploitation that stretch across borders, it is necessary for us to globalize resistance and join hands to push back against oppressive policies which threaten the lives of the most vulnerable.