Defending a People’s National Health Insurance – quality health for all, not private profit

This campaign has ended. 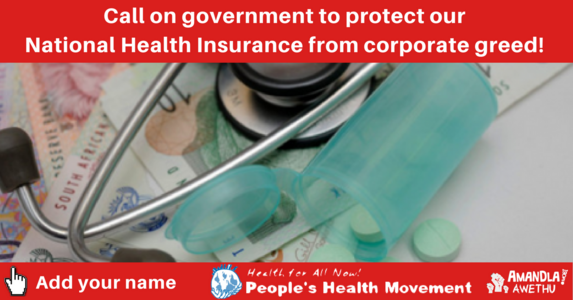 We demand a People’s NHI that is free from capture by the private sector and professionals.

We demand that the Task Teams/Groups for Implementing the NHI be reconstituted. Their Terms of Reference should be rewritten to protect the principle of equity, health as a right and an equitable single payer system, as is stated in your White Paper.

The membership of the Task Teams should not be dominated by private sector representatives but include Civil Society, community health workers and nurses.

The SA National Department of Health (NDOH) is establishing the National Health Insurance (NHI) to achieve universal access to quality health care for all who live in South Africa. We welcome the commitment from the NDOH to a NHI based on principles of equity, health as a right and redress of past inequalities. The White Paper on the NHI makes it clear a ‘Single Payer’ system is the best way to achieve this.

The recent NDoH documents have jettisoned these principles of equity and human rights in how it has set up Task Teams, Advisory Committees and Working Groups to ‘implement’ the NHI. The Terms of Reference for these structure now introduce protections for the medical schemes and private sector actors that are not present in the White Paper. If implemented, they will exacerbate inequality in the health sector. Also, the composition of the Committees prescribed in the Government Gazette is dominated by the private sector and other special interest groups – with almost no participation by civil society, which is present on only one of the 7 structures. Instead, we see committees loaded with representatives of Medical Schemes, Actuarial Society, Private hospital groups, Health professional societies, Academic and research organisations. Almost all of these groups have a vested interest in keeping the health system largely the way it is and many of them are directly responsible for the fundamental health system inequalities that the NHI is meant to address. This is elite decision-making at the expense of ordinary South Africans – it isn’t democratic or logical to reserve decision-making for those who stand to benefit directly while keeping ordinary South Africans in the dark. It is crucial we keep the ‘Single Payer’ principle so that all people (employed, unemployed, civil servants and all) are treated equitably in paying into and receiving benefits from the NHI.

We reject an unequal and fragmented system, which is against the progressive principles of previous planning documents for the NHI. Has the private sector and vested interests captured the NHI through secret lobbying?

We reject a NHI driven by technocrats and people with direct conflict of interest in designing the implementation of the NHI. We will not accept our public health system, with all its faults, being sold off to private interests so they can secure an NHI favourable to their profits. South Africa belongs to all who live in it – all South Africans have equal status and rights to influence decisions that will affect them and their children for generations. We say no to corporate capture of the NHI. We want an accountable NHI and an accountable Health Ministry that does not say one thing in a White Paper and do the opposite behind closed doors. We will not stand back and allow this shameful co-option of the NHI by a powerful elite.

We call on all individuals and Civil Society organisations to insist that our leaders and the Department of Health officials are accountable and keep to the policies they have said they would advance. Forward to a People’s NHI, forward!

Following a meeting between a group of civil society organisations (TAC, PHM, SECTION27, SSP and RHAP) with the Minister of Health and Director-General on 7 September 2017, the Department of Health agreed to readvertise the NHI Implementation Structures document for comment and to include Civil Society in all the structures proposed. Civil society representation on all NHI task teams has been one of the demands made in our NHI petition.

However, other concerns remain unaddressed: No attention to Community Health Workers (CHWs) or Nurses in the Human Resources committee, ongoing dominance of private sector representatives and those connected to the Medical Schemes industry, and unchanged Terms of Reference for the Consolidation of Financing Arrangements Committee, which entrenches divided funding pools that undermine universal healthcare access for all people. On 30 November 2017, civil society organisations again submitted concerns to the Department of Health.