To: Mr Lungelo Mbandazayo, Acting City Manager of the City of Cape Town 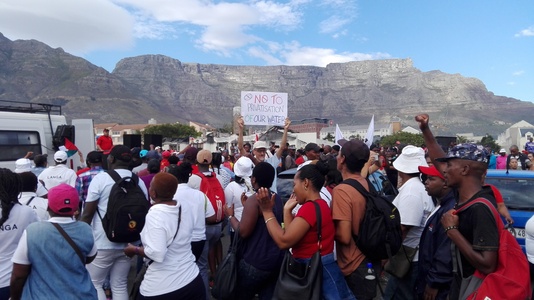 1. We reject the City’s 2018/19 budget- it’s unaffordable, unfair, unreasonable, untrue,unwise, unjust, unacceptable. Open their books
2. No to desalination; stop the dumping of all waste into the sea. Use recycled water for sanitation and recharging the aquifers.
3. Stop the installation of water management devices (wmds); remove those already installed and reverse the charges and fines for them; we demand an independent investigation into the tenders of the wmds. Scrap all arrears, Scrap all incorrect bills;
4. Reduce the 6b tariff to an affordable level now; increase the industrial and commercial tariffs; an end to high tariffs for domestic users.
5. Open all the 70 springs at source, to the masses; treat and take the water to where it is needed
6. Remove alien vegetation, especially in dam catchment areas.
7. Fix all the leaks in public and private infrastructure; mass public works schemes to employ unemployed plumbers; train the unemployed
8. Force large scale agriculture to adopt smart irrigation methods; assist the small farmer
9. An end to privatization of water and services; re-municipalise them; end outsourcing. Water is part of national and international commons.
10. Protect all aquifers; reverse the mining and development licences for the PHA. No extraction without recharge plan- publish them.
11. We want a Child Commissioner and an Environmental Commissioner, with real powers
12. A just, equitable and sustainable water plan by and under direct community control, based on regeneration and conservation.
13. Decent housing and public services for all

If the City fails to implement these reasonable steps, the City management must fall

Cape Town is being used as an international social experiment. Yes there is a drought but 'day zero' is a deliberate lie to justify the rapid privatization of water. The City used a formula that assumed it would not rain; it assumed that it would be windy and hot every day; they failed to consider that large agriculture was abusing water; day zero was flawed from the beginning. Now the international banks are using Cape Town to threaten other cities in SA and the rest of the world, to privatize water. That is why we need to join hands to stop the privatization of water in Cape Town
* over 260 000 families (almost half of Cape Town) has already had water management devices forced onto us.
* these limit the amount of water that households can use per day
* the city aims to change to pre-paid water; in other words, no money, no water; they have already introduced this in parts of Grabouw
*currently the real cost of water provision is R6 per kl; the City has increased this by 500% and want to increase it by a further 27-87 %. They want to charge high tariffs for water so the large banks can make pots of money.
*the City wants to borrow from international banks for large scale projects such as desalination; the major part of the water budget will go to desalination, about R7.4 bn. In other words, the international banks will make profits out of water. Desalination puts our water into private hands, for profits; desalinated water has caused the death rate from heart attacks to double; it also makes fruit less nutritious.
* just as the national govt increased electricity prices by 20% per year, the City wants to do the same with water.
* many of the water management devices (over 16%) are defective; they are leaking and shut off, leaving thousands without water for basic needs;
* many are getting huge bills of thousands and sometimes hundreds of thousands of Rands.
*pressure is reduced in the pipes during the times that people need water; thousands are without water.
*the City and other levels of govt knew more than 10 years ago they had to adopt water saving measures such as using recycled water for sanitation; they knew they had to recycle water for recharging aquifers; they knew they had to fix the infrastructure (the City loses 100 million litres per day through leaks). They failed.

If we do not stop the privatization of water, the same high tariffs and poisonous desalination will be forced on more communities in SA and around the globe.

The next generations will be paying huge tariffs for water. If you have no money, you will have no water. People will die as a result. The City must be stopped.

The Water Crisis Coalition is marching to the City and to parliament on the 25th April 2018 at 10am from Keizergracht , at the end of Darling Street, opposite the castle. We want to hand over all signatures and petitions. We invite you to print copies of our petition and to bring them along on the day. Copies can be obtained via [email protected]

Here is the downloadable leaflet which can be used as a free train ticket on the 25th April 2018, for the march.
https://drive.google.com/file/d/0B2Fo95AHFCN2aThmWFRrdHZvYUhCNXp0ejFvX3piNHU3eVRZ/view?usp=sharing

Joint Saftu-Water Crisis Coalition memorandum handed to the City on our demands on water 12 April 2018
https://drive.google.com/file/d/1xLVvvmRPzUZKJWFBxwGphhGFItJF6W0-/view?usp=sharing

Downloadable petition which we will hand over to the Mayor on the 25th April 2018. Why not sign up your community or workplace?
https://drive.google.com/file/d/0B2Fo95AHFCN2VVQ0OWYtSGNIWkNDeXVBWk9lcDk5ZFU5MVU4/view?usp=sharing

Call by Reclaim Camissa on the need to preserve our springs
http://thegreentimes.co.za/calling-government-conserve-groundwater-springs/

There are a number of other petitions against the budget. We are not in competition with any of them but wish to bring our perspective forward. If you are not comfortable with signing our petition, here is a site which you can consider:
https://www.dearcapetown.co.za/coct-budget/

All signatures will be sent to the City email for this objection process before 4th May 2018; however we plan to hand over most of our petitions on the 25th April 2018, when we march to the City. The march starts at 10am at Keizergracht, opposite the Castle in Cape Town. Bring along all the petitions you have signed too. It is a joint march with Saftu (South African Federation of trade unions) but everyone is welcome to attend, irrespective of party or union affiliation