To: Minister Ebrahim Patel, Minister of Trade, Industry. The Presidency.

Minister Patel - reject the EU & US ‘bad deal’ - this deal does not save lives! 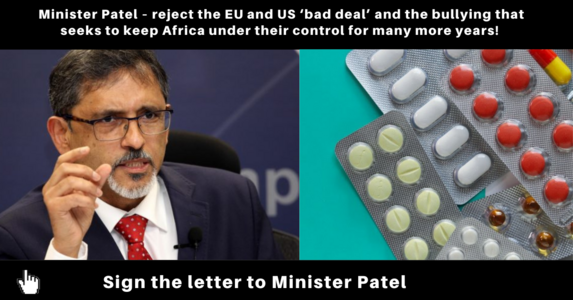 Minister Ebrahim Patel has the power to say no to a ‘bad deal’ and insist on negotiations for a genuine waiver.

The EU and the US are currently bullying the global south to pressure us to agree to conditions that will keep access to vaccines, tests and treatment out of the hands of people in Africa, for a long time.

We call on Minister Patel to:

1) Reject the ‘bad deal’ that is contained in the leaked text. It does not save lives or bring about greater access.

2) Not betray the trust of over 100 former world leaders, Nobel laureates, faith leaders, activists, researchers, health care workers, academics, economists, scientists, patients, the Vatican,and millions of people who support a genuine TRIPS WAIVER - we say - ‘NO DEAL IS BETTER THAN A BAD DEAL’.

3) Not succumb to the pressure by the WTO Secretariat, EU and US to ‘agree’ to a ‘deal’ quickly, but rather expose this mockery for what it is – a very bad deal which sets a negative precedent for the next pandemic.

4) Not let down the 100 countries that already support the full TRIPS Waiver.

After 17.5 months of dragging their feet, negotiations are currently underway to reach a quick ‘deal’ at the World Trade Organisation (WTO) on the TRIPS WAIVER proposal - boldly led by South Africa and India since October 2020.

MInister Patel is in charge of the negotiations for South Africa.

The leaked text of the proposed ‘deal’ shows they are not negotiating a waiver, as originally requested, but rather, conditions and clarifications, which after this much time and deaths, represents a poor compromise.

It will be a shame if Minister Patel supports the bad deal contained in the leaked text. He should not.

The leaked text represents the interests of the EU and the US and other vested interests. It is a very bad ‘deal’ that does almost nothing to advance the demand for equitable access to vaccines (and other health products) for the majority of the world’s population - and yet the poorest and most marginalised everywhere have suffered the worst effects of the pandemic.

The South African Government should REJECT this deal which is related to the ongoing TRIPS Waiver negotiations for fairer access to COVID-19 technologies for everyone, everywhere.

We call on organisations and individuals in South Africa to sign onto an ‘Open Letter’ to Minister Patel and the South African Government. You can read and sign the letter here: https://forms.gle/GTT9kmf9nECFfSF86

For more information on the leaked text and reactions to it, please see: https://healthjusticeinitiative.org.za/2022/03/24/trips-waiver-negotiations-leaked-text/